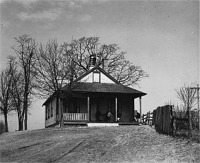 So, the first big test for the Scottish Government’s shiny new Schools (Consultation) (Scotland) Act 2010.  And how did it do?

Well, let’s start at the beginning.  Local authorities were closing schools because pupil rolls have been dropping over the years, which combined with a lack of proper maintenance of school buildings meant that it was costing lots of money to run some of them.

Including rural schools.  But campaigners, including groups like the Scottish Rural Schools Network, pointed out that a rural school was not just about the money – it was the hub of the community and closing schools sometimes posed a threat to the viability of a whole village.

So, the Scottish Government was elected on a manifesto promise to introduce a “legislative presumption against the closure of rural schools”.  And they duly passed the 2010 Act, stating that this fulfilled that promise, despite nowhere mentioning a presumption against closure.

Instead, there are some additional procedures and consultations to be gone through if you’re thinking about closing a rural school.  Which is fine, but certainly doesn’t look like a “legislative presumption against the closure of rural schools”.

So, SNP-run East Ayrshire Council decided to close little, rural, 52 pupil Crossroads Primary School.  And, in accordance with the new legislation, the parents asked the Scottish Government to “call in” the decision to consider whether to overturn it.  But the Government refused.

Let’s be clear, they didn’t refuse to overturn the decision – they decided not to call in and consider the Council’s decision at all, with a spokesperson stating that “it was satisfied the council’s decision had met its statutory obligations.”

To translate, the Council did the consultation process correctly, produced the right reports, and ticked the right boxes – so the Government won’t interfere.

Under the old rules, any closure proposal which would result in primary school children attending another school more than five miles away automatically had to be approved by the Scottish Ministers.  And the former Cabinet Secretary had form in this area, overturning the closure of 4 pupil Glentrool primary school.

So under the old rules, the closure of Crossroads Primary School (a rural school) would have been considered by the Scottish Ministers, but following the introduction of an Act designed to safeguard rural schools, the closure decision is not so considered.

Meanwhile, the current Cabinet Secretary went on the telly and was rude about the parents who opposed the closure of their children’s school.

“Access to a local school is particularly important in rural communities. We will introduce a legislative presumption against closure of rural schools and tighten the regulations for closing all schools.”

“School closure decisions must be taken by those with the best knowledge of local circumstances and locally elected and accountable. Scottish ministers will only ever become involved when there is strong evidence that a council has failed to fulfil its obligations under the act.”

And how can one tell, without calling in, that the Council has fulfilled its obligations?  The authority claimed it would cost over £1 Million to refurbish the school, while the parents had a quote for about half that amount.  How can Mike Russell tell that the authority are right and the parents are wrong without investigating or considering the case?

It is deeply ironic that, at least for Crossford Primary School, the whole safeguarding rural schools agenda actually left them with fewer safeguards than they would have had under the old rules.  With the budgetary pressures mounting on local government, rural schools should not expect any high profile Government interventions in their cases anytime soon.

One is left wondering what the point in the 2010 Act is at all?  As before, the best defence against the closure of a rural school is to have a hung Council where no one party has overall control.