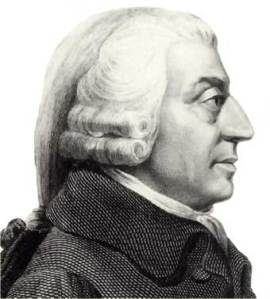 From the Legal Skills Prof Blog (part of the Law Professor Blog Network), I note the following historical excerpt:

“In his recently published biography of Adam Smith, Nicholas Phillipson describes a period of tumult in Edinburgh following the Jacobite rebellion of 1745. Phillipson notes that the rebellion and its aftermath prompted soul-searching by the elites of Edinburgh, including lawyers (pp. 84-85).

The ruthless campaign to exterminate Jacobitism with the sword had revived long-standing fears that the Crown would attempt to pacify the Highlands by conquest. The lawyers . . . responded to this threat by arguing that the causes of the rebellion had more to do with the structure of clan society than with the ambitions and treachery of a few Highland chiefs, and that the problem of pacifying the Highlands could be better addressed by encouraging civility, commerce and economic improvement than by the use of military force. . . . It was no coincidence that some senior lawyers had begun to ask whether the present state of legal education was appropriate to present needs. Some thought that advocates, like moderate ministers, should be educated as gentlemen. As the new Lord President, Robert Dundas of Arniston, told the Faculty in 1748, ‘Over and above being careful to learn thoroughly the principles of the Roman Law and the Laws of Nature and Nations, they should take pains to acquire the other Sciences and accomplishments becoming the Character of Gentlemen’ and, above all, ‘that rational & manly eloquence’ should be the mark of their profession. . . .

As the Law Prof Blog notes: “Obviously, whatever the merits of calls for other changes in legal education more than 260 years ago, reform then did not include expanding the profession beyond “gentlemen.””!

This entry was posted in Blawgs, Faculty of Advocates, From the Archives and tagged Adam Smith, Jacobitism, Roman Law, Scottish Highlands. Bookmark the permalink.